Open Plan Recycling in the Workplace 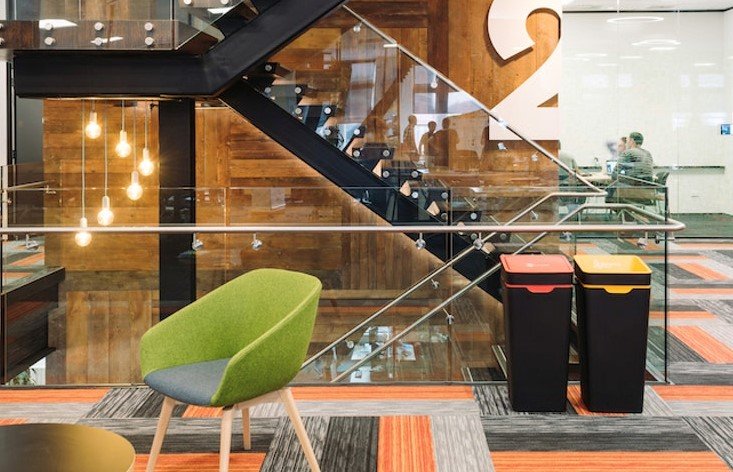 We’re constantly talking about the behaviour change the bins create, but what changes specifically? This article will discuss how and why these behaviour changes occur simply with the introduction of our bins.

The Presence of Choice

With the removal of desk bins and stand-alone landfill bins, central recycling stations mean that people are faced with several options when disposing of their waste and recycling. This encourages users to consider their waste habits, rather than blindly throwing waste into a bin.

It comes down to convenience – the presence of choice makes it easier for an individual to recycle with little extra thought or effort. Let’s discuss an example, say someone ate an apple at their desk, with a desk bin they are likely to place the apple core and other waste into that bin indiscriminately, without considering other options. With a communal recycling station, users have to make a short walk, around 10 seconds or less, to a selection of waste options, likely including an organics bin that sees their apple core sent for composting. Over the course of a day and several streams, this represents a significant diversion from landfill.

One of the core principles of Open Plan Recycling is visibility, bringing recycling out into the open plan of modern spaces. Office design has continued to transform, but recycling and waste systems have long been neglected, meaning bins are inconsistent with office design and often hidden away in cupboards to maintain aesthetics.

That’s why Method designed their bins to be sleek and compliment modern aesthetics. Bins out into the open, positioned frequently around the office means that individuals are reminded to recycle and consider their waste behaviours. When recycling bins are hidden away, they can easily be forgotten and underutilised.

With visible bins, individuals are more aware, even subconsciously, that others can see what they’re doing. That sounds a little unusual, but with the rising social concern around recycling often people are motivated by the social pressure to conform or ‘do your part.’

We aren’t encouraging anyone to police their co-workers, but often the unconscious belief that someone may be watching can be motivation enough to motivate them to consider where they’re placing their waste.

The bins and other organisational steps towards sustainability can also contribute to a culture shift within an office. Where conversations about sustainability and recycling become more frequent, in the lunch rooms, at ‘green team’ meetings or while meeting a co-worker at a recycling station. This all adds to a united cause and can actually change motivations and behaviours at work, and subsequently at home.

The bins have been designed to help users assess how to sort their waste at a glance. The colour coded lids and clear graphics make it easy for users to identify the different streams, and with consistent streams across a space user become familiar and sort waste instinctively. Find out more about the bins design here.

We already talked about how damaging traditional desk bins can be, so Method designed a desktop solution that encourages the separation of waste at the desk. Precyclers are temporary desktop storage for waste before it’s transferred to a communal station. Convenient but effective at facilitating the separation of waste and recyclables at the desk.

Recycling Bins Where Recyclables are Produced

Last but not least, placing solo recycling bins where recyclables are produced provides a positive form of convenience. An organics bin in the kitchen can capture coffee grinds and food waste that would have otherwise likely ended up in landfill. Check out our bin placement guide for more information.

Mackay Office Cleaning are a proud stockist of Method Recycling Bins, please contact us to discuss the right recycling solution for you.

7 Benefits of a Regular Office Clean

So, You’re Moving Offices? Here Are Tips To Do It Safely